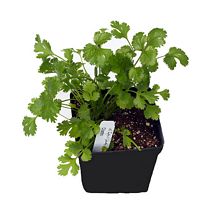 Cilantro is the most difficult herb to grow because it is so short lived and it needs cool temperatures to grow well. Many people think that they kill Cilantro because it doesn’t last very long when they purchase plants at their local nursery. Cilantro will bolt (send up a flower stalk) as soon as the roots get above 75 degrees or so.

This happens really quick in a small 3″ pot in hot sun in a nursery yard. Many times the plant is already flowering at the larger warehouse type stores.

Cilantro needs to be grown in early spring or fall when the weather is cool. It requires mostly sunshine but can be grown in morning sun and shade in the hot afternoon. Growing it in the ground with mulch on top of the roots helps keep the soil cooler longer. With the best conditions Cilantro will last about 8-10 weeks before flowering. Once it does flower, it will make seeds which can be harvested as Coriander or replanted to grow more Cilantro plants.

Many people grow Cilantro by reseeding it every 3 weeks or so and have a patch growing all summer long. Planting it very close together shades the roots and helps keep it cool.

To harvest Cilantro, you can begin cutting as soon as the plant is about 6″ tall by removing the outer leaves and leaving the growing point intact for the new leaves to grow from. Another method is to wait till the plant is almost completely grown and pull it up by its roots to use the whole bunch at once.

Culantro (also known as Thai Parsley) is the plant which is most similar to Cilantro in flavor and is used by many South American countries as well as in Asia even more frequently than Cilantro. It is a little more difficult to start from seed but once it is established, it has a longer growing season than Cilantro.

Culantro (Eryngium Foetidum), in Puerto Rico known as Recao is spicy and extremely similar to Cilantro. In Asia it is known as Long Coriander and in Mexico Culantro is known as Mexican coriander.

It is not frost tolerant but will grow indoors in a bright window. In warm weather, grow it where you would grow mints. This is one of the tropical herbs that likes shadier, fernlike conditions with well drained but moist soil conditions. The seed can be difficult to germinate.

To harvest Thai Parsley or Culantro, remove the oldest leaves all the way down to the base of the plant leaving the young new leaves to grow. The leaves can be chopped and used fresh or frozen to keep their fresh flavor.

Culantro is rich in iron, carotene, riboflavin and calcium and is widely used as food flavoring and seasoning herb for dishes and chutney in the Caribbean; it is very popular throughout Asia including Vietnam and Thailand. Caribbean cooking. Puerto Rico uses it extensively in all kinds of stews, soups, beans etc. Used in salsas in Cuban cooking as well as Mexican foods.

For cooking, use Cilantro or Culantro in salsas and other Mexican dishes as well as Thai cooking or anywhere you want the flavor to be strong and pungent. Keep in mind that many people are not Cilantro lovers so go easy on it at that dinner party.

Back to Herb Encyclopedia
We Guarantee Our Plants!