Which Tomato is Right for Me 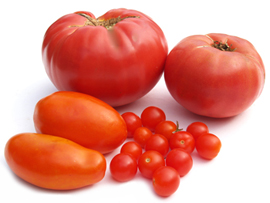 by Dani Carroll
reprinted with permission

It is an extremely busy time of year in my garden, and I imagine in your own lawn and garden as well. While a lot of the cool weather vegetables are nearing the end of their time in the garden for now, a lot us are looking forward to the warm-weather vegetables. Vegetables such as tomatoes, okra, beans, peppers and eggplant come to mind. Most vegetable gardeners spend the most time on tomatoes. We spend the most time staking them, harvesting them, preserving them, and picking out which cultivar we want to purchase and plant. I make the decision on which ones to grow by past experience. There are a number of tomatoes that provide consistent harvests year after year. There are also a few that may lack in the number of fruit produced, but I like the taste so much that it does not matter.

Decisions, decisions, decisions! The possibilities are almost endless when it comes to tomatoes. There are literally hundreds and hundreds of choices, especially if you start your own from seed. Poring over the seed catalogs can be very overwhelming. Probably the biggest debate right now is whether to choose a hybrid or an heirloom tomato. Many questions have been asked about the advantages / disadvantages of the two. It may be easiest to start with what exactly hybrid and heirloom mean.

The term heirloom tomato has several definitions. In the commercial industry, it may refer to tomato cultivars (open-pollinated, we will get to that) introduced before 1940 or tomato cultivars that have been around for more than 50 years. And some will debate 50 years, calling an heirloom a tomato that has been around for 100 years. In a loose definition of the term, heirloom tomatoes refer to tomato cultivars that have been passed down through generations by saving the seed from the plant and replanting the next year. Often these heirlooms take on the name of the area /family where the seeds came from. For example, Cherokee Purple. This is an heirloom tomato most of us are familiar with. The seeds from this tomato were shared from a gentleman in Tennessee. The seeds had been shared with his family generations prior from Cherokee Indians in the area.

Heirloom tomatoes are open pollinated. Open pollinated tomatoes are plants that will keep their genetic traits if the seed are saved and planted again. Open pollinated plants can be self-pollinating or cross-pollinating. Tomatoes, for the most part, are self-pollinating (as are most beans and lettuce). This simply means the flower pollinates itself (with a little help from the wind and the buzzing of insects that shake the flower). The seeds saved from tomatoes grown this year can be replanted next year to get the same type plant. There will always be some genetic diversity when saving heirloom, open pollinated seeds. That is how nature works. For the most part, though, the genetic characteristics of the plant will remain. Other plants are cross-pollinating. The flower does not pollinate itself, but depends on others (insects, wind, even bats!) to transfer pollen from one flower to another. One example is squash. To save the seed from an heirloom squash, the plant should not be planted with other squash type vegetables where cross-pollination may occur. Have you ever noticed a strange squash plant growing out of your compost pile? This was probably the result of a squash fruit that was thrown in the pile. The seeds germinated, but had cross-pollinated with another squash-type plant the year before.

I think there are a lot of heirloom tomatoes that are quite tasty. Black Krim is one I really like. There are a few strains of Brandywine that I also grow year after year. Aunt Gertie’s Gold is another one, a large golden beef steak type. The great thing about heirlooms are the wonderful colors, the odd shaped leaves and the taste of some are unsurpassed in my opinion. Unfortunately, they also have their downfalls. The seeds were saved from year to year because of their taste. This mean most heirlooms have little to no disease resistance. Soil diseases may wipe them out quite quickly. They definitely take extra care in the garden. Fruit production is not near the production of some of the hybrid tomatoes. In fact, a lot of heirlooms take a long time to produce that first fruit. I have waited until fall many times to pick heirloom tomatoes that were planted in the spring. Was it worth it? Absolutely. Very tasty. This is a general statement. Some heirlooms may produce all summer long. Some may never succumb to disease pressures. For the most part, they do not produce as much and incur more diseases than hybrid tomato plants.

Now on to hybrid. Hybrid plants are not genetically modified organisms (GMO). That is a common misconception. A hybrid tomato plant is a tomato plant that is the cross of two open pollinated tomato plants by controlled pollination. Controlled pollination means the pollination was done by hand. A hybrid tomato plant has two parent tomato plants. The parents were chosen by their desirable traits such as disease resistance, heat tolerance, fruit color, shipping ability, and even height. The pollen from one is used to pollinate the other. The seed is taken from the fruit. The resulting plant from the seed is then a hybrid or F1 plant. By controlling the pollination, the plants from the seed will be the same. For example, a pack of Celebrity (F1 hybrid) seeds will grow into Celebrity tomato plants all the same.

Hybrid tomato plants also have a space, a big space, in my garden. They are bred for a reason. Many exhibit resistance to a lot of plant diseases such as Big Beef and Celebrity. The Talladega tomato is resistant to two viruses along with other tomato diseases. The list of hybrid tomato plants and their attributes are long. After you grow different varieties for a few years, you will have your favorites.

If you routinely save your seed from heirloom plants to plant the following year, do not count on doing the same with hybrids. Remember, hybrid tomatoes are the result of two separate parent plants. The seed saved from the fruit of the hybrid (F1) tomato plant will not produce the same plant. The seed may produce plants more like the parents. You really have no idea what traits the new plants will have.

When choosing tomatoes for your own garden, you may want to give heirloom and hybrid tomatoes both a chance. I have found a place for both in my own garden.

‘Planting Vegetable Plants at the right time for your area is crucial. Make sure you check for the last frost date and watch the weather carefully before planting’