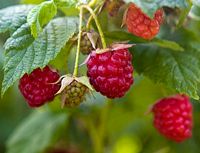 Raspberries and Blackberries prefer a soil pH of 5.6 to 6.2; acid soils may require applications of ground limestone to increase the pH. Soil testing information is available from your county Cooperative Extension office. You can improve the level of organic matter in the soil with good compost.

The Blackberry or Raspberry Plant

The crowns and roots of raspberry plants are perennial, but individual canes live two years. Each spring, the plants produce canes (suckers) from buds on the crown and on underground lateral stems. These canes grow vegetatively during the first season, overwinter, and produce fruit during the summer of the second year, while new canes emerge to provide a crop for the following year. Second-year canes die shortly after fruiting. Everbearing raspberries bear a crop on the tips of first-year canes in the fall, followed by a typical summer crop on the lower portion of the canes the second year.

Although a wide selection of berry varieties are available, only a few will do well under the very short growing seasons and severe winters of northern New England. Select only those that are rated very hardy with early or mid-season ripening if you live in very cold areas.

Generous use of mulches like pine straw, sawdust, or peat moss will help control weeds, conserve moisture, and keep roots cool. Increased organic matter from decomposing mulch will help improve soil structure and nutrient uptake of plants. Replenish mulch as needed to keep the mulch depth at 2 to 4 inches.