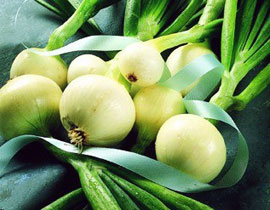 Long Day Sweet varieties will generally mature a few weeks before the storage varieties. They will store for one to five months, so eat them fresh from the field. These varieties will do well from the mid-west to the Canadian border.

Short Day Sweet varieties start the bulbing process when the day-length reaches 10-12 hours. Since they are planted primarily in the south during the winter or early spring months they will take approximately 110 days until they mature.

If planted in northern states in late spring, they will mature in just 75 days but produce smaller bulbs. The earlier you plant them, the larger they will get.

Onions are best grown in direct sunlight on raised beds at least 4″ high and 20″ wide. It is best to add 1-2″ of compost to the soil and mix in well. Spacing of rows should be 36″ from the center of one row to the center of the next row.

Set plants out approximately 1″ deep with 4″ spacing. On the raised bed, set two rows on each bed, 4″ in from the side of the row. Should you want to harvest some of the onions during the growing season as green onions, you may plant the plants as close as 2″ apart. Pull every other onion during the growing season, leaving some to mature into larger onions.

After planting add organic fertilizer approximately every 4 weeks during the growing season. General Purpose or Vegetable type fertilizer is fine but make sure the numbers are low such as 3-2-1 or 6-3-2.

Water the transplants immediately after planting. Because of the shallow root system, onions require frequent furrow irrigation. Avoid overhead irrigation, which causes foliage diseases. If the foliage has an unhealthy, yellowish tint the plants are being over-irrigated. The soil will be overly dry around an under-watered crop and may become cracked. Onions generally require 30″ of irrigation during a growing season and the closer to harvest, the greater the need for water. If the onion does not get enough water it will not make a large bulb. When the necks start falling over and the onions mature, watering should be discontinued and the soil allowed to dry.

Orienting plant rows and spacing to maximize air movement helps reduce the time that leaves are wet and results in less disease.

Weed control is very important early in the onion growing process. Be careful not to damage the onion bulbs when cultivating. Keep soil loose so onions can expand easily but do not push dirt on top of the onions since this will prevent the onion from forming its natural bulb. A light organic mulch will help control weeds and preserve moisture; pull the dirt back from bulbs when they begin to bulb.

Onion tops turn yellow and fall over when the growing process is complete. Bending the tops over early will only expedite the process and decrease bulb size. Pull the onions out of the ground and let them dry in the sun for two days. Lay the tops of one row of bulbs over the bulbs of another to prevent sunscald. When onions are dry, clip roots and cut back tops to one inch or braid uncut tops together and hang onions in an airy spot.